The Good, The Bad, and The Ugly

1,096 People reached/contacted
183 Trees cleared from trails and roads
53.5 Miles of trail worked on

In so many ways…. what a year! “The Good, The Bad, And The Ugly” couldn’t better define the 2020 CBCC field season. Although the ‘good’ was mighty prevalent, the ‘bad and the ugly’ may leave lingering impressions for some time to come. 2020 and COVID 19 were anomalies amongst anomalies, but it sure gave us a glimpse of what the future of recreation and public land impacts may be like with a growing population base and the realization of open space as a means to spread that base out. With Colorado’s population set to double by 2050, pandemics aside, there is much to be done to provide the infrastructure, regulations, and controls to not just steward our backyard, but ensure it has a vital and lasting future. We are proud to saddle up with so many partners to continue discussions, set action plans, and implement on-the-ground solutions in preparation of these inevitable impacts.

Trails: What a silver lining to the uncertainties of living through a pandemic. And, how gifted we are to have one of the finer trail networks in the world right outside many of our backdoors! The CBCC was at it earlier than ever this year, starting in May to get ahead of trails emerging from winter and giving the good people of the shire the ability to safely get outside on sweet track. Sustainability, progressive improvements, and better trail experiences are at the forefront of CBCC efforts when it comes to trails, and this year the crews knocked it out of the park (forest). From early season drainage work and water mitigation on the front country trails, to heavy maintenance and rehabilitation work deep in the backcountry, the CBCC often took days or even weeks on many parts of the network to improve trail and resource vitality. If you rode, hiked, or ran trails from the Lupines to 401, from the Dyke to Dr. Park and nearly all in between, you were bound to see the efforts of the CBCC out there. We had a stellar crew with a great vision to ensure many, many smiles were had. CBMBA and the CBCC believe that these recreation experiences connect people to the environment and instill a stewardship ethos and a desire to give back. We hope we reached more people along those lines this year.

Connectivity: Well-planned trail networks and connections between those networks is vital to the user experience, and equally important is helping keep users off of roads as much as possible. When CBMBA and the CBCC have a chance to work with partners to realize better trail and network connectivity, we are enthusiastic to lend a hand! After nine years of envisioning, planning, and ultimately getting NEPA approval, we were honored to be asked by the BLM and the CB Land Trust to help design and build a wide path trail to connect Gunsight Bridge and the Oh Be Joyful campground—the Coal Train Trail. No small task this mere 0.5 mi trail would be—there were archaeological and mine reclamation concerns, major seeps and drains, wetlands, steep slopes, ranching operations, coal slags, massive bench cuts, a 40’ gap to bridge, and machines required to build trail in some funky places. 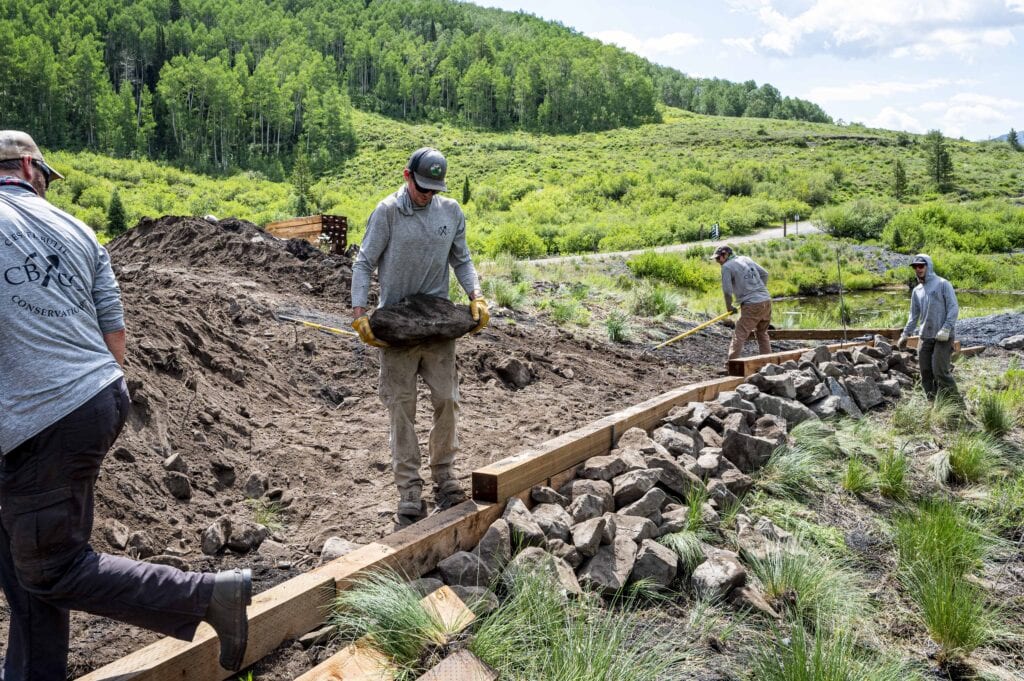 With additional support from the Department of Natural Resources/Div. of Reclamation and Mine Safety (DNR/DRMS) following their years of work to reclaim the entire Slate River mining remnants, we were able work with all these entities to install three 12’ bridges, two 36’ boardwalks, four rock-hardened riparian sections, two rollovers, one massive 250’ bench cut, and one 40’ bridge to connect Gunsight to OBJ to ultimately make a muscle-powered trail connection from the Town of CB all the way to the Wilderness boundary. 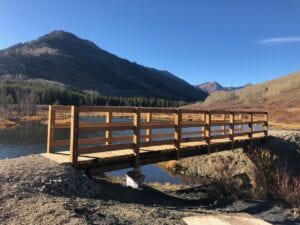 The CBCC also led the advance work in helping to align phase two of the Middle Cement Creek Trail, then cut corridor and take on the real nasty sections of new build. Paired with the ferocious appetite for trail building exercised by CBMBA volunteers, the CBCC helped to further another 0.9 miles of this beast of a trail build. Next year, we plan on finishing this 3.4 mile new trail to connect the entire Upper and Lower Cement Creek drainage. It’s a massive, massive build, but nothing the CBCC can’t champion along with the hordes of volunteers coming out to do massive, hand-built earthwork! 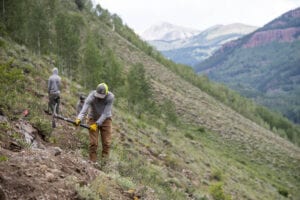 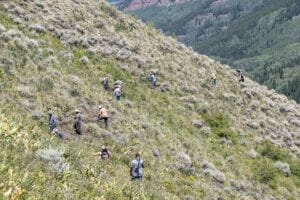 Designated Camping: One of the first things that came out of the Sustainable Tourism and Outdoor Recreation (STOR) committee with unanimous support was a request to the US Forest Service (USFS) to implement a means of consolidating and mitigating the impacts of rampant dispersed camping. Between the efforts of the Gunnison Ranger District (GRD) and with support from the National Forest Foundation (NFF), the Gunnison County Stewardship Fund (GCSF), the USDA/USFS, and the CBCC, the designated camping effort became a reality this year in the Slate River and Washington Gulch Drainages. The CBCC and GRD have installed 85 inventoried campsites, including numbered signposts, fire rings, allocated parking, and signage with information about how and where to camp. This project will extend to neighboring drainages over the next few years, and will help provide better management and ecosystem health. 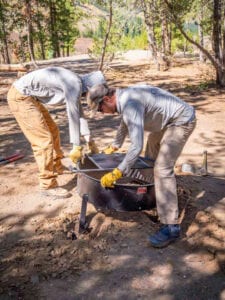 The Bad and the Ugly

We all know the Bad, and much of the above narrative is about the work being done to counter the Bad. As for the Ugly, we’ll let our pictures do the talking. 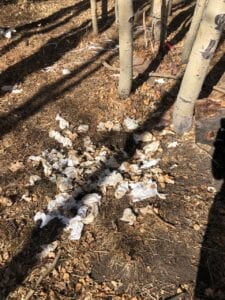 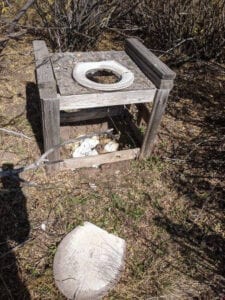 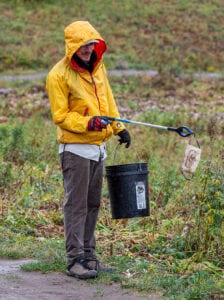 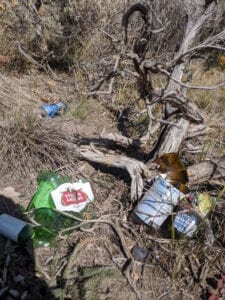 For all of the Bad and the Ugly out there this year, there were many unseen Goods in the many private citizens picking up trash, communicating with visitors, and sending in observations. The number of undocumented smiles and high fives (mainly elbow and fist bumps this year) was surely up from last year with so many people seeking solace in the Great Outdoors. The first timers, youngsters, and veteran trail enthusiasts were out there connecting with our good Mother Earth via fine, flowy, sultry singletrack and the places it brings you. Those are the images we hope are implanted in your dreams and visions over the next months during these different times. May those be the pictures for your lifetime, and may those pictures remind you how important it is to steward our backyard—that we are forever in the service of our public lands.

We are so grateful for the opportunity to work alongside all of you fine people and agencies to have realized another successful CBCC season. We look forward to “boots on the ground” in May 2021. 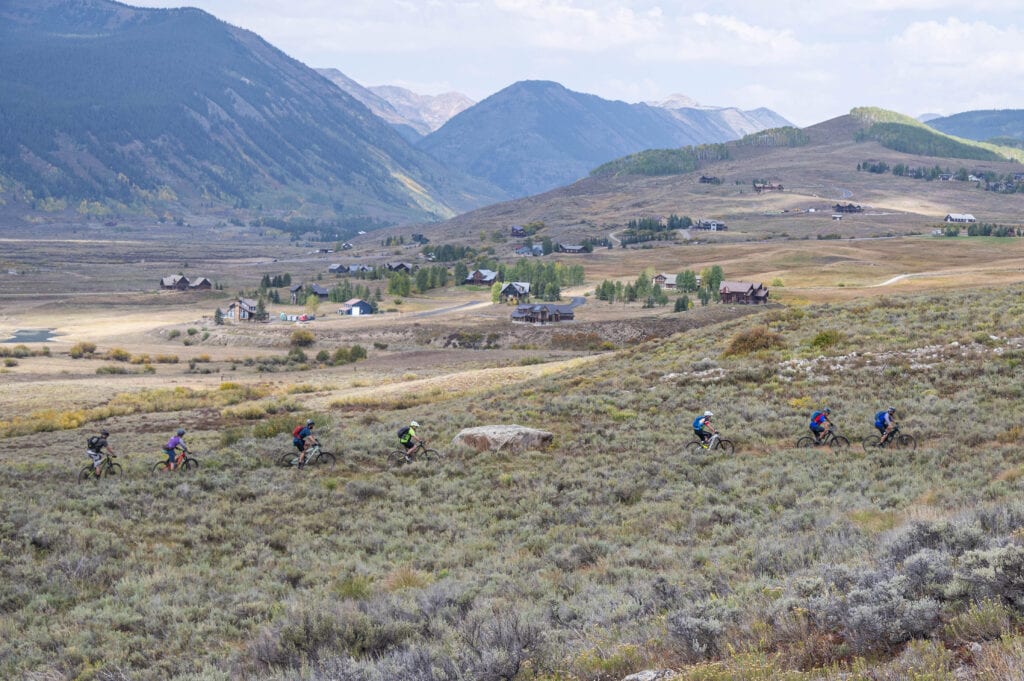 A special thanks to our Donors, Sponsors, and Partners. We can’t do this work without you!

In Honor of Peter Youngwerth**

In memory of Mikey Larsen

From Linda to Stuart — thank you for 25 great years*

The McLean Family, In Honor of Cindy and Kelsey McLean. Your strength lives on.

Mark and Annette Miller, in memory of Fidelis Payne