“It’s all about the attitude…”

…says the 73-year-old, aluminum hardtail-riding hard man. Bar-ends, flat bars, and 1.9” tires! As he asks me why more people don’t ride their bikes to save our planet and cause fewer impacts, I cannot give an answer. He also asks me why so many people shuttle their bikes via vehicle and I cannot give an answer. I only know that I’ve seen this particular gentleman ride his bike to the Kebler ‘Y’ to nordic ski in the winter. I’m blown away that he will not ride an e-bike, will not get in a car to ride his bike, and rides that bike during every season to earn his recreation. He’s a true hard man, and he’s looking out for the planet. It’s all about the attitude, he says.

Early season, county-wide collaborative messaging around a ‘plan B’ for camping worked. July was unexpectedly pleasant, despite being busy in Town. You could find camping spots in the most popular drainages, visitors were using the fire rings, parking in the designated areas, and cleaning up after themselves. The July visitor seemingly wanted to play by the new rules. The attitude changed out there a bit in the backyard from July into August. The August Visitor was a bit more apt to use trails and public lands as he or she desired. We’ve gone from seeing a more sustainable backyard in July, to a more impacted one in August, and the trash and negative impacts have also reared their ugly heads. Crews just pulled out the ‘backcountry hot tub’ from West Brush—a car battery pumped water from the ‘crick’, through coiled copper pipe, over the fire to heat the water and then fill the tarp-lined tub. Pretty cool, but then they left it out there. Not cool.

Designated camping works, and for all the concern and question leading into the season, it proved to be a game changer. So many thanks to the USFS/Gunnison Ranger District (GRD), National Forest Foundation (NFF), and STOR Committee for pulling that trigger and entrusting that task to the CBCC. They CRUSHED it! Alex Banas has spent his entire CBCC season dedicated to implementing the designated camping. Nick Catmur, CBMBA Operations Manager, worked alongside the USFS and other partners to not just oversee the project, but implement it with Alex. CBCC regular crew members were recruited certain days of the week to supplement the effort. To date, we have finished installing site posts and fire rings in every drainage with the exception of Walrod Road. This includes the latest 36 sites in the Kebler/Lake Irwin area, and 14 sites in the Gothic drainage. We have installed the necessary road signage for the full project in the Brush Creek and Cement Creek drainages. With Slate River and Washington Gulch done too, we’re almost there. Expect to see the road signs going in for Gothic and Kebler shortly, and as the year winds down, we’ll continue to work on parking and access for the designated sites. The CBCC deserves massive kudos (beer) for truly taking the bull by the horns and installing this infrastructure as quickly and efficiently as possible. 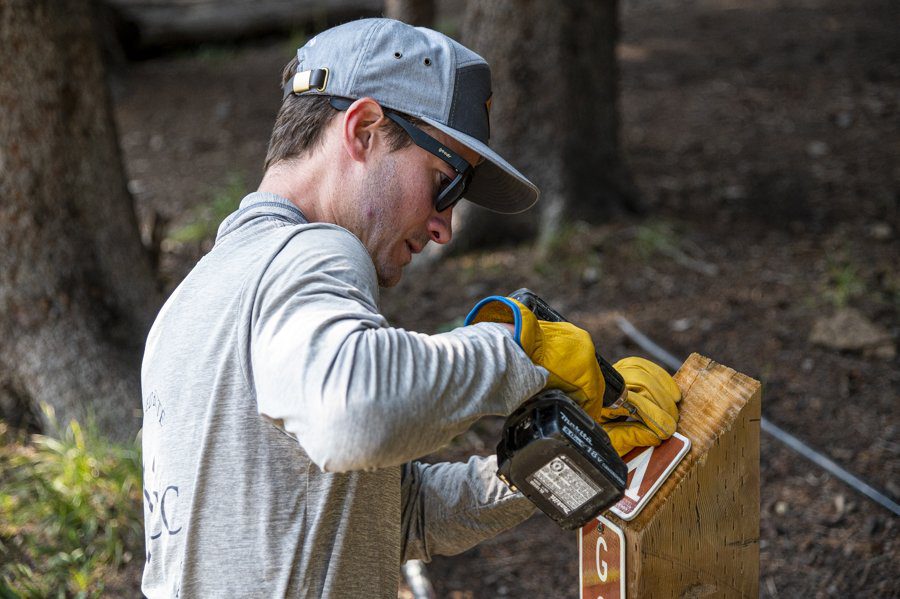 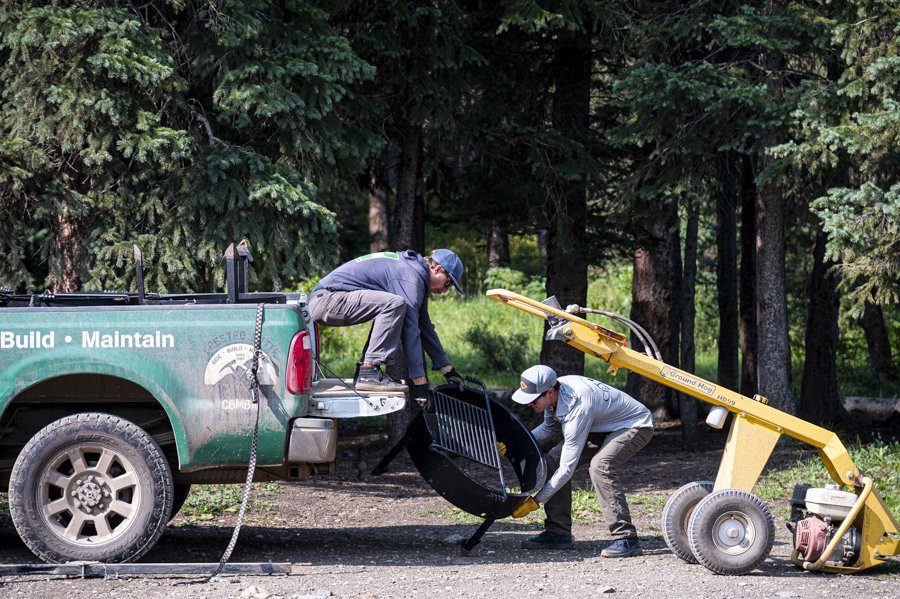 As of mid-August, our crews have worked on 32.18 miles of trail, cut out 154 trees, made 653 reaches to visitors and trail users, collected 477.5 lbs of trash (excluding the hot tub getup), maintained and cleaned 776 campsites, and have picked up 44 human poops. They’ve spotted 31 campers outside of designated sites in the Slate and Washington Gulch corridors and have decommissioned 42 illegal fire rings.

As for trail improvements, CBCC Crews have been working diligently on the Scarp Ridge Trail, decommissioning braided sections and adding more drainage to prevent ruts. They gave a massive facelift to 403, and worked on 409.5, Strand Hill, and Doctor Park Trails. The monsoon deluges did a job on many trails, but crews fixed up Tony’s/Upper Loop, Budd Trail, and the Maroon Ave trail connector, in addition to some Rustler Gulch trail debris field work. We are also looking ahead to some 401 maintenance projects in conjunction with the NFF/Great American Outdoors Act in September. 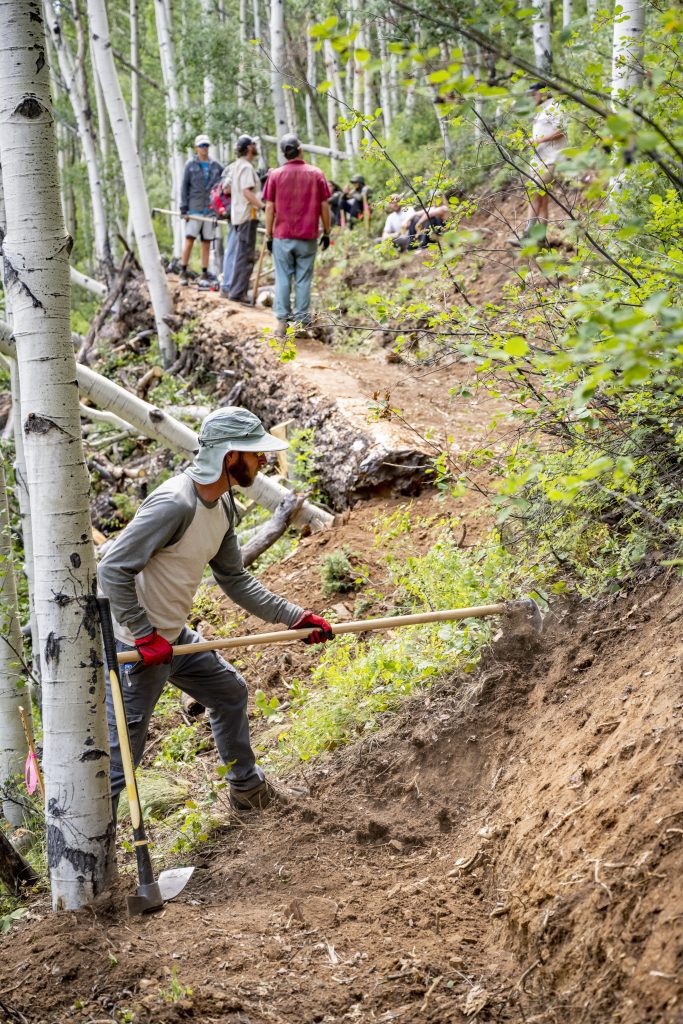 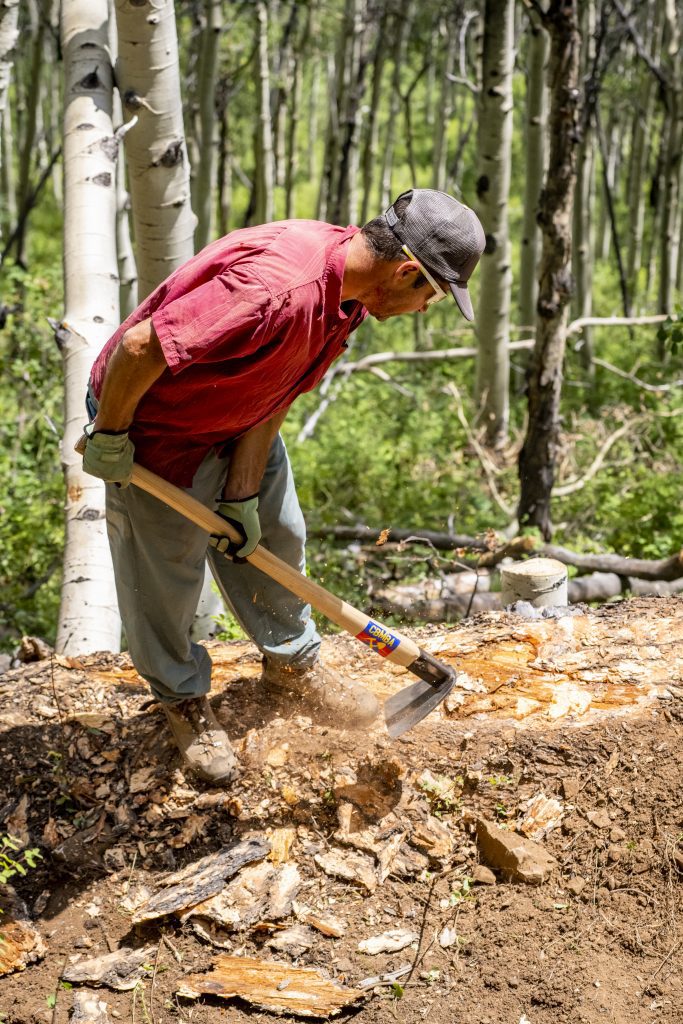 In addition to the CBCC efforts, the good volunteers of this community have been at it again!  CBMBA’s Riders Off the Road plan was further implemented with Phase 3 of the Middle Cement Creek Trail nearly completed at the recent Annual Overnight Volunteer Weekend.  Herculean efforts were employed as 96 hardcore volunteers took a weekend to work tirelessly on a steep, deadfall laden, densely vegetated hillside to realize another 0.4 miles of trail. We are now currently 454’ from connecting with the non-system Fenceline Trail. When we do hit it, it will all be the Middle Cement Creek Trail, and it will become a legal, system route. Over the course of 3 years, 16 CBMBA volunteer workdays, CBCC trail workdays, STOR Core workdays, and massive volunteer efforts (many returning gluttons for punishment), 2.86 miles of hard-earned trail has been built to create the 4.4 mile Middle Cement Creek Trail and connect the Upper and Lower Cement Creek Trails.  In the end, the Cement Creek Trail will be 9.3 miles where riders, hikers, runners, and horses can stay off the busy road and enjoy some beautiful country with this magical trail connection!

More great work is to come, and more great work will be accomplished when we finish those last 454’ on Middle Cement on Wednesday, September 8th. Join in to be a part of seeing this trail completed, connected, and open to the good people to go play on. Remember to stay on trail and be aware of sensitive habitat out there. Keep the observations coming, maintain that positive Earth-friendly CB attitude, and enjoy the least impacted backyard we’ve had in 2 years.