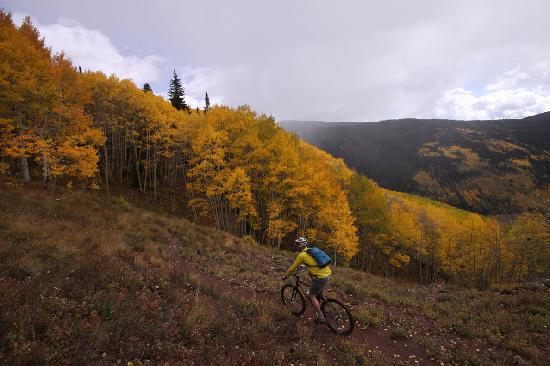 It’s pouring rain, I’m in a suit and tie, the one I have for weddings (including my own nearly 15 years ago) and funerals, and I’m sprinting down a marble corridor looking for the Colorado state flag. The flag is my clue that I have found our congressman’s office, where I’m meeting Ashley Korenblat, former IMBA president and current director of IMBA’s Public Lands Initiative. The two of us, along with other delegates to the National Bike Summit, are in Washington, D.C., to explain to all of the newly elected congressmen why bikes are the answer. In fact there were 800 of us from around the country.

Thanks to, Bikes Belong, IMBA, Ergon, Team Scudmore and my wife, Susan, I was able to go to D.C. to speak about some big topics affecting cyclists across the country:

• Cycling as a viable economy for local communities

Balancing competing interests on our public lands and determining just what these lands can sustain in the future is a huge task. If you look at the history of our public lands, most of the laws and regulations were created for one of two reasons:  1) resource extraction, eg. Timber cutting and mining, or 2) conservation.  The folks that created the Wilderness Act knew that we needed to set some places aside, but at that time outdoor recreations as an economic force was a very new idea.  Today there are towns in every state that used to depend on resource extraction and now depend on recreation. IMBA is working to create new laws and regulations that recognize and protect the recreation economy.   So when Ashley called and asked me to go to DC, how could I say no.

Thankfully, the summit in D.C. was set up to educate a rookie like myself on how things work up on Capitol Hill. During the two days prior to meeting with all of our elected officials, we were in and out of break-out sessions where topics ranged from singletrack success stories around the country to the merits of urban bike share programs. And that was one of the special things about the summit: it was all about all kinds of bikes and which really brought everyone together.

The D.C. trip gave me a chance to  hopefully gain the congressman’s support for a new backcountry singletrack trail in Colorado that will connect Gunnison to Crested Butte. Gunnison Trails, our local advocacy group, is working to make this trail a reality. Last year, one of our many challenges was a Wilderness proposal called Hidden Gems, which could block the final, key section of the trail to bikes.

This year, a proposed molybdenum mine threatens to engulf parts of the route in tailing ponds. As it’s proposed, mine tailings would fill this amazing alpine basin, which the trail would contour for many miles. Think about driving over Fremont Pass between Copper Mountain and Leadville (a giant moly mine where whole mountains are missing, lots of contamination)  not exactly the vista we have in mind. Other elements of the mine that seem incongruent with tourism and a world-class mountain biking trail would be miles of giant conveyor belts, helicopters, bulldozers, lots of new haul roads, trucks, and a real threat to the water quality of Crested Butte, Gunnison and everywhere else downstream.

So in addition to getting approval to build the trail from the Forest Service, we are now working to explain to both the Wilderness advocates and the proponents of the mine what the economic benefits of the trail will be.  The trick here is to find a way to use the Wilderness Act to protect the trail from the mine.  Not an easy mission, but important to IMBA because as pressures on the land grow all over the country we are going to need more tools to protect the trails.

I find the flag with the big red “C” and the rest of my colleagues. We are shown into Congressman Tipton’s office, and he and his staff listen attentively to our story of an economy based on recreation: Crested Butte, for example, is a world-class destination, and cyclists from around the planet travel there to ride. We make our case against the threats.  A mine will provide jobs and rapid development for a while, but sooner or later the ore will be played out and the mining company will exit, leaving behind a blighted landscape, overbuilt communities and acute unemployment.

The meeting goes well and the Congressman wants to come to Gunnison to learn more about the trail. The access and trail concerns I face in my home in Western Colorado is but one example of a challenge that is forming over public lands all over the western United States. And support in Washington is only a small piece of the puzzle. Later in 2011 Ashley will meet with Wilderness advocates to discuss opportunities to work together to protect our precious public lands. All this advocacy, discussion and negotiating, makes building the trails, let alone riding them, seem like the easy part.